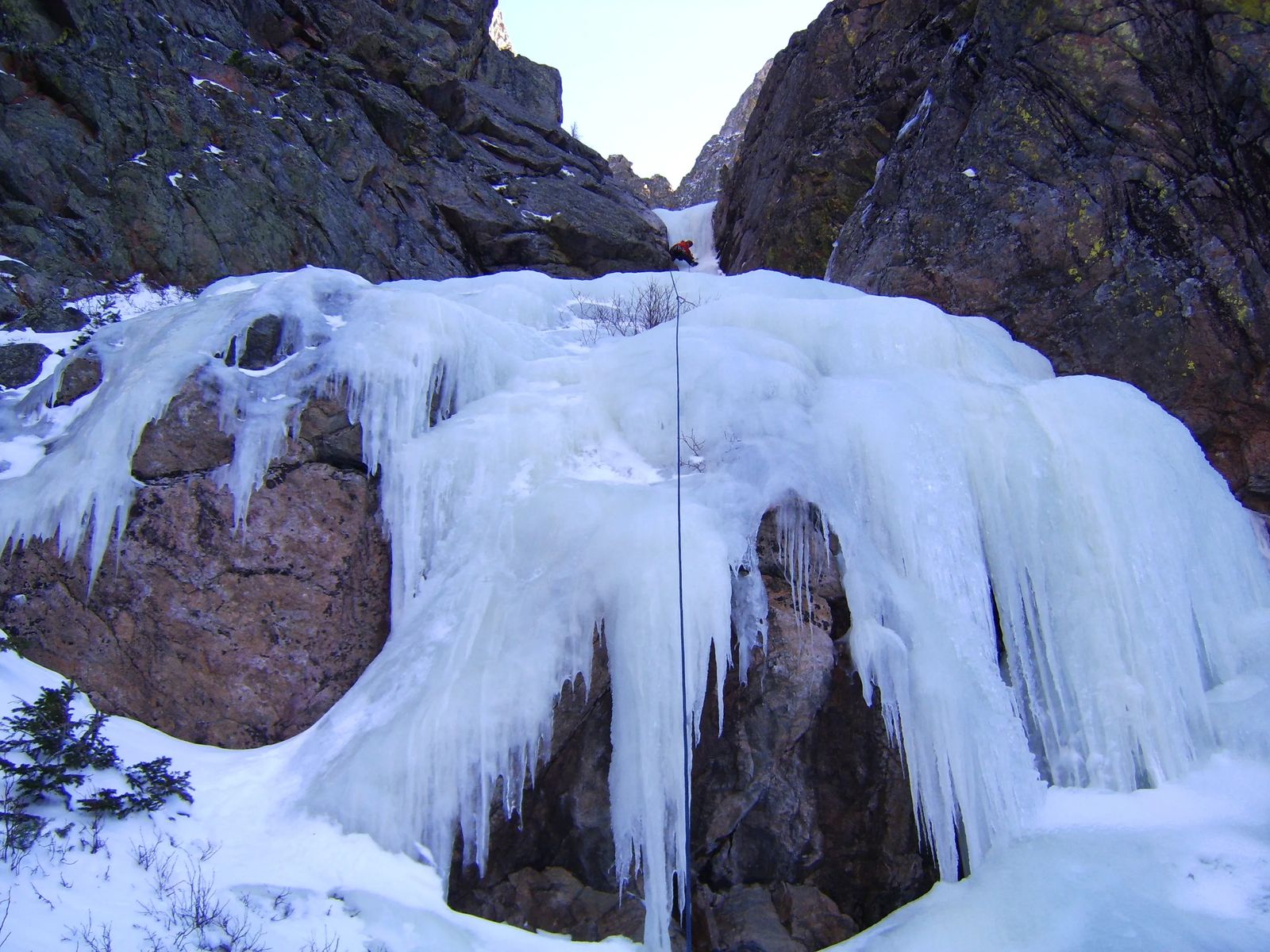 Will You Climb this Winter?

Around this time of year, climbers all over start to hang up their climbing shoes, and break out the axes and crampons.

Even though we haven’t had too many cold spells here in Billings, the mountains are dipping well below freezing every night, and there are many days when the temps don’t even get above 32. That means those little creeks and trickles of water that you see in the mountains are setting up into waterfalls frozen in place.

If you have never ice climbed before, let’s talk about what to expect when scaling the frozen water.

What to Expect when Ice Climbing

Back when I was first getting started climbing ice, I asked a bunch of climbers that did both rock and ice what was easier; rock climbing or ice climbing. Every single one of them gave me the same answer: they’re different, you can’t compare them.

I call balderdash on that one. I’ll compare them. Rock climbing is easier. Rock largely stays the same year after year, an ice climb can change in the middle of the season. I like the idea that the substrate I’m scaling isn’t going to crash down around me (although rock could), so all in all I actually prefer to get on the rock instead of the ice.

But it’s hard to climb rocks when it’s 10 degrees out. 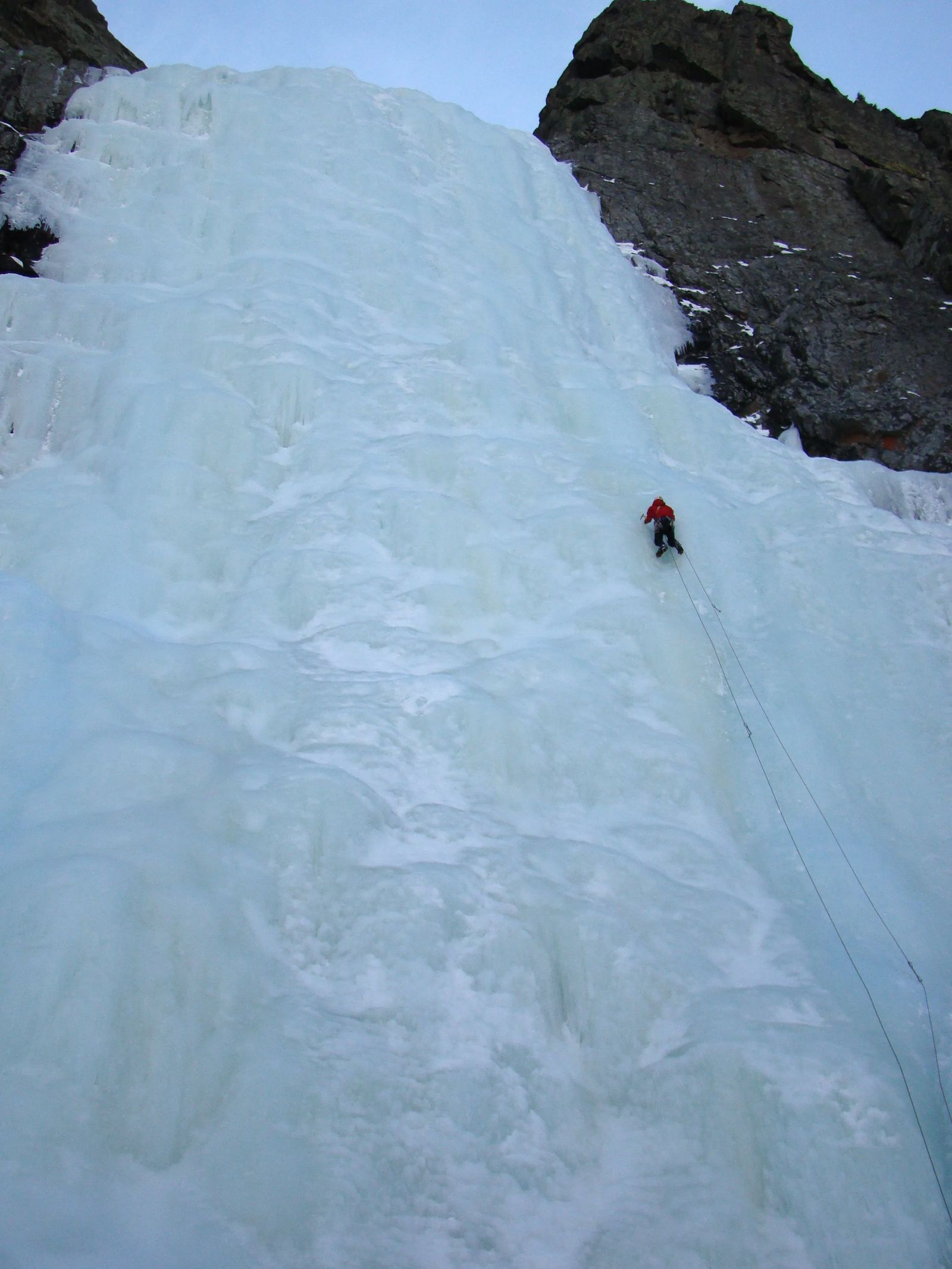 By Definition, Ice Climbing is Cold

The first thing to expect when ice climbing is that it’s cold. You need some good warm clothing that will keep you warm as you sit on a block of ice as the lead climber scales the way to the top.

Then, when you’re climbing, it’s still cold. With your hands above your head, the blood drains down the arms. That lack of blood means your fingers can go numb in a hurry.

Before you even head out to conquer the frozen fortresses, have amazingly warm gear like poofy coats, thick mittens, and wool socks. 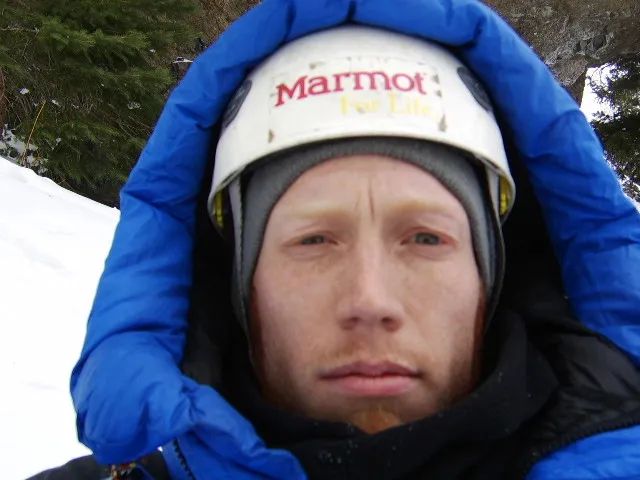 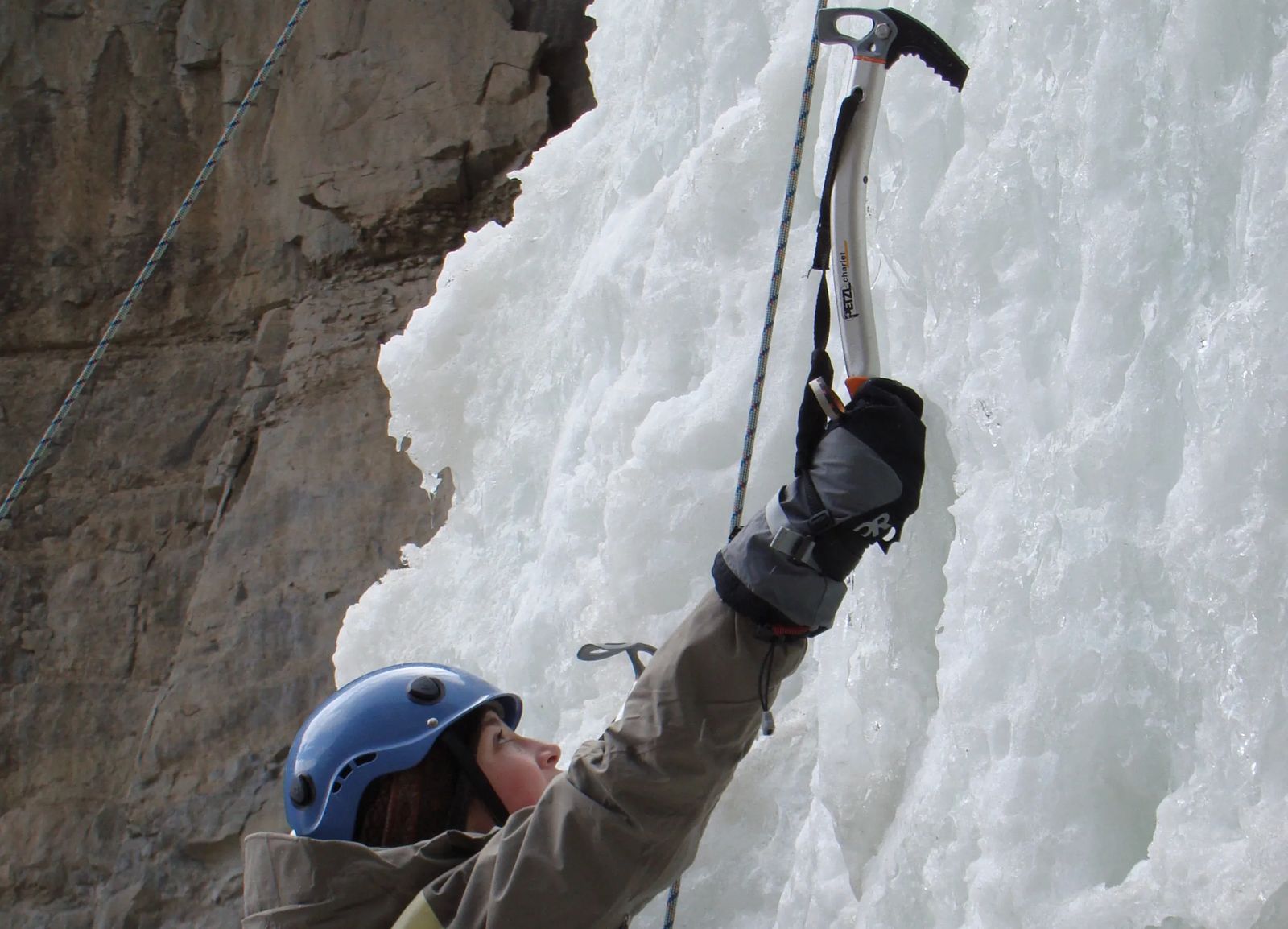 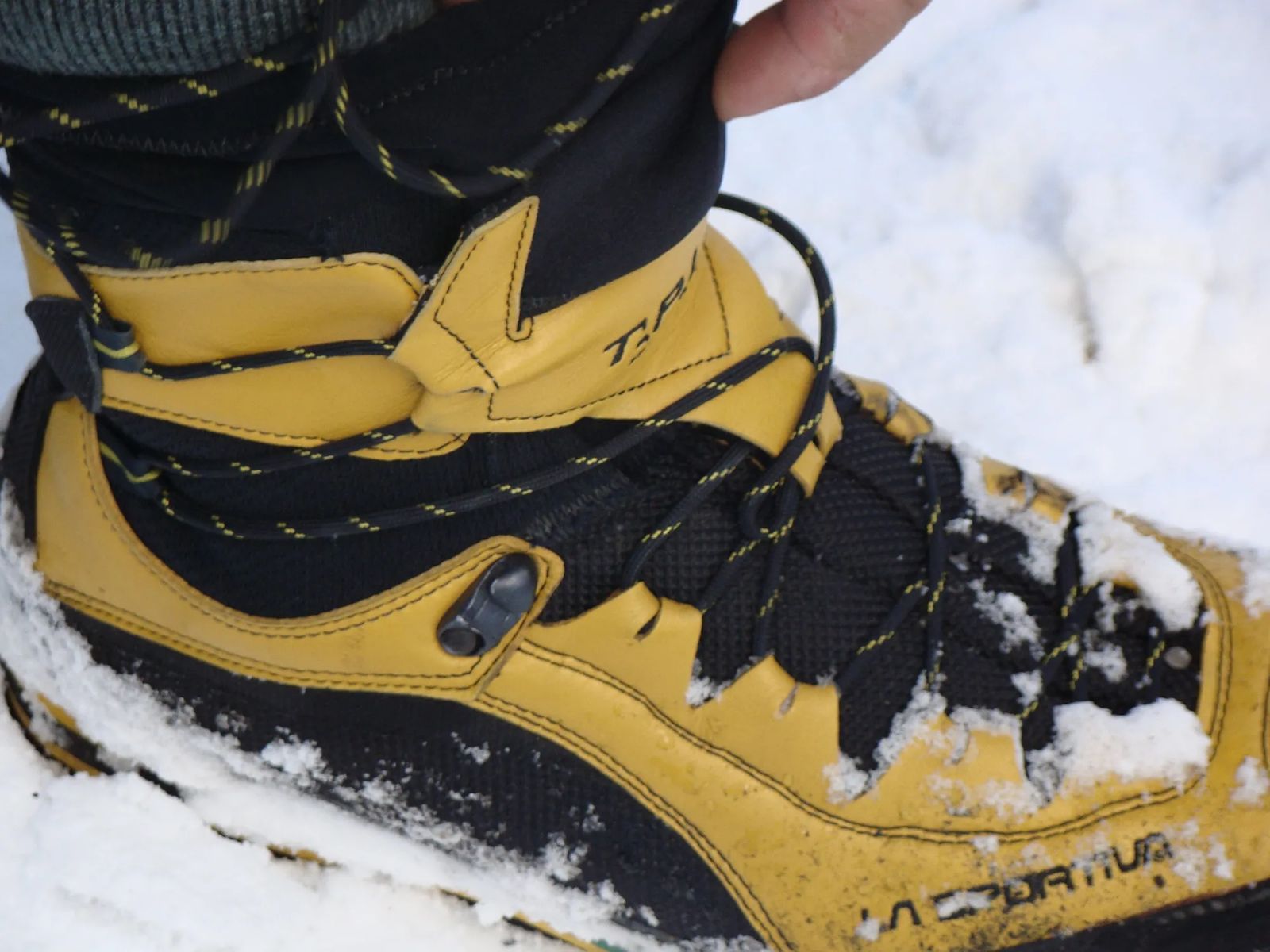 You can Smash Your Way to the Top, But Technique is Better

The next thing to expect is that like all sports there’s a learning curve. If you have climbed rock before, you have the basics down, but the technique is a little different. But when you figure out how your axes grip the ice, and how to poke the toes of your crampons in just right, it gets a bit easier.

But remember, ice is slippery. I had a crampon fall off (not really all the way off, but came off the bottom of my boot) as I was walking near the base. One step that I expected to grip didn’t and I was on my back.

Finally, ice climbing isn’t something you can just run out and try for the afternoon. Here in Billings we have the Rimrocks within minutes of just about anywhere. If you want to give rock climbing a shot, you can borrow a pair of shoes and boulder around on some of the rocks or shorter routes. Ice climbing, however, requires a lot of specialized gear.

Learn from a Seasoned Climber

You don’t have to invest in all of the gear at once, but it takes more planning than a quick rock climbing trip. So team up with an experienced climber so you can get the hang of things.

You can rent a lot of the equipment, borrow other stuff, and get the feel for it before dumping thousands of dollars into a new sport. 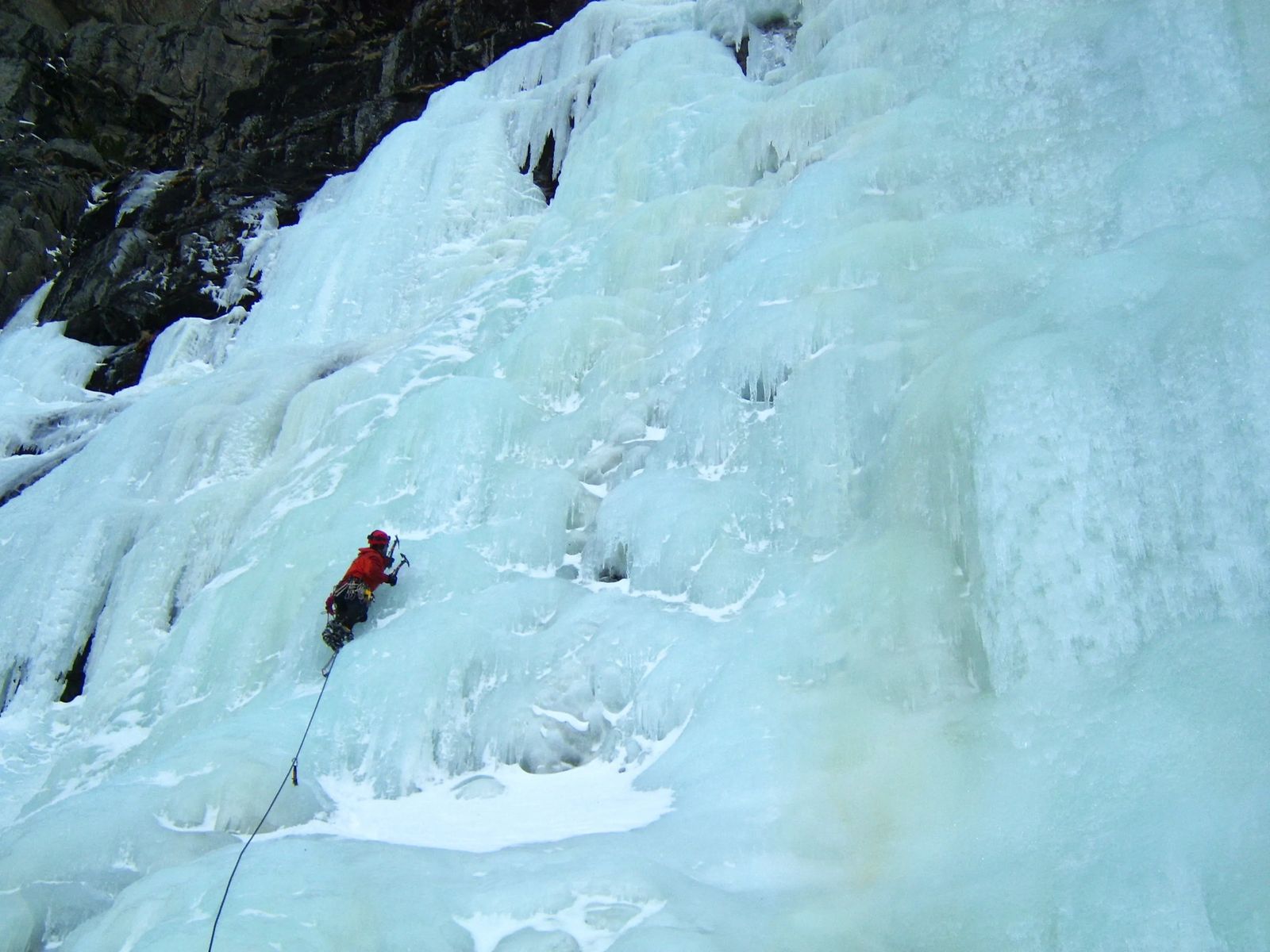 Where to Ice Climb Near Billings

Ice climbing may not be as convenient as rock climbing, but there are plenty of places to scale frozen water nearby.

Just outside of Red Lodge there are a handful of climbs throughout the canyons.

Up the East and West Rosebud Valleys are climbs that range from easy to hard. Some of them are known around the world because they’re so spectacular.

But if you really want to get into the thick of ice climbing, you either hit up Hyalite Canyon near Bozeman, or the South Fork outside of Cody, Wyoming. Both of these hold ice festivals throughout the winter, and it’s a great opportunity to meet like minded adventurers.

Whether you’re a novice or experienced, there’s always something thrilling about scaling a frozen waterfall that few others have done before you.