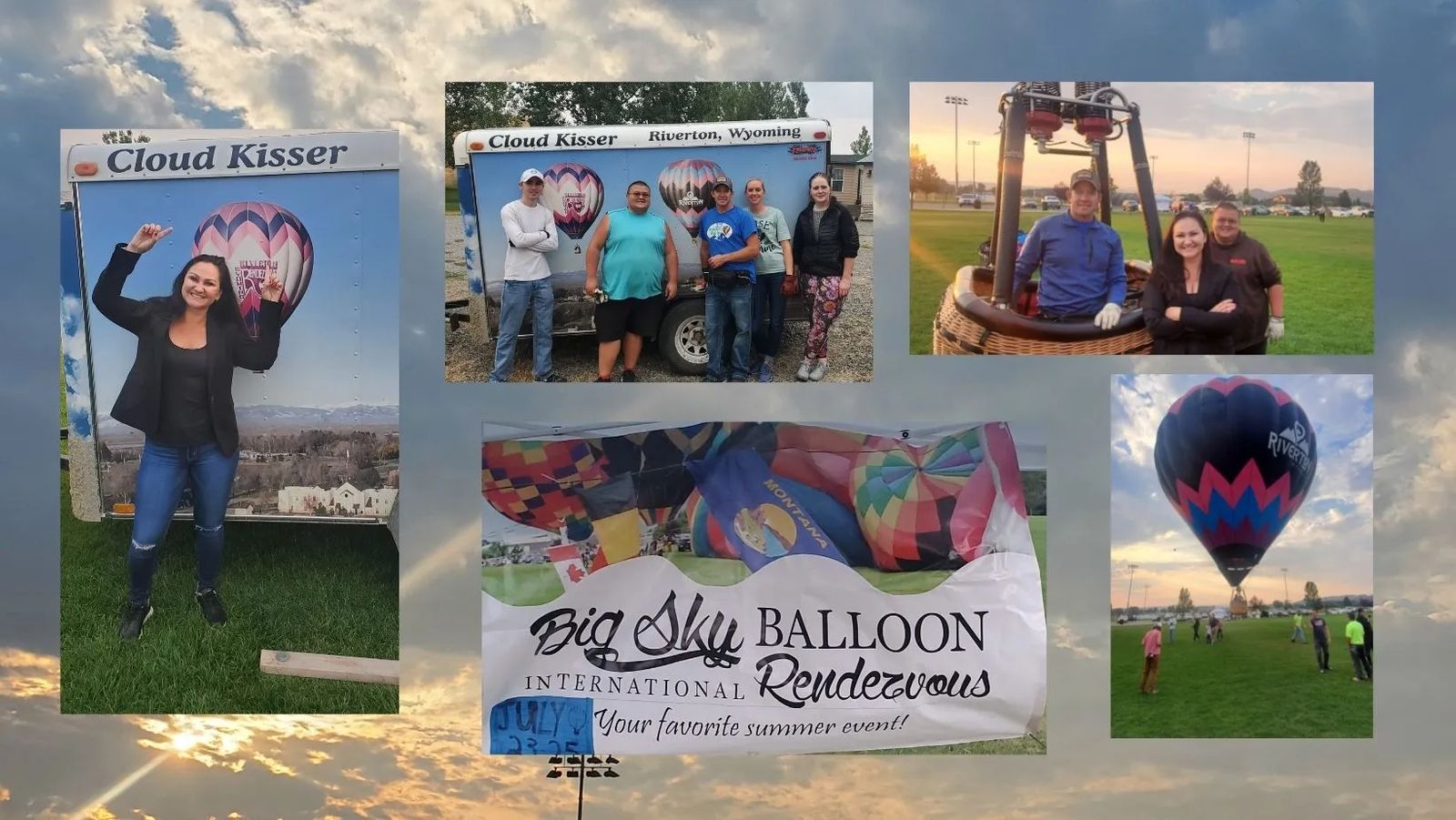 The first manned and untethered hot air balloon flight took place in 1783 in Paris, France.  People must have been equal parts amazed, awed, and convinced they were insane.  But nearly 238 years later, we see all that it has opened the door for and it’s an activity that has endured as an entertaining hobby, pastime, and educational discipline.  Here in Billings, the Big Sky International Balloon Rendezvous is having its annual event this weekend.  It’s been a very popular event for over 25 years for people to get up at dawn and drive to watch the balloons fill the horizon as they take off; imagining what it would be like to have a ride in one and maybe marveling at what the process must be to prepare and fly one of the balloons.  But as the technology is over 200 years old, it seems like it must not be all *that* complicated.  As with most things in life though, once you watch it in real time, you have a much greater appreciation for how much goes into this adventurous occupation.  The knowledge, the experience, the preparation, the ability, and just the sheer number of people helping for each balloon is amazing.

We watched pilot Andy Samuelson from Riverton, WY with his balloon, “Cloud Kisser” from beginning to end.  Andy, a teacher while on the ground, was with his wife Jolene, a speech therapist, their three (adorable) little girls, and volunteer crew including student pilot Morgan Miller.  First, it's the checking of the weather and the radar, having been continually following it for several hours.  What is the wind doing?  What is the wind forecast?  Are there any storms coming in or the possibility of one forming suddenly?  What is the air temperature?  What is the visibility like?  So many questions they need to have an answer for before even truly beginning.  Then they do a test with latex balloons.  Fill them up, let them go, and watch every little movement they make for miles into the sky until they’re out of sight.  They call these indicators their “pi-balls” (short for pilot balloons).  After they decide that the weather will cooperate and they can fly safely, then it’s all hands on deck to get the balloon ready; which includes at least half a dozen people helping prepare with each balloon.  Out comes the basket from the trailer, the basket gets cabled to the car, and the giant—as in 363 pounds giant—bag containing the balloon itself, also known as the envelope, gets positioned in front of the basket.  From there, a quick test of the fuel and delivery system is done before tipping the basket on its side and attaching all of the heavy-duty cords between the envelope and the basket with large carabiners.  (So much equipment!)  Now they can finally begin filling the balloon using heat, which is literally the hot air that comes from the open flame from burning liquid propane.  Since hot air is less dense than cold air, this makes the air inside the envelope less dense than the surrounding air outside, allowing it to lift. They began filling the balloon while unloading it from the bag, with the pilot in between the cables of the balloon in order to control the air flow.  Perhaps one of the most interesting things is the person standing about 200 feet away from the balloon top, holding onto a cable attached to the top of the balloon while it filled and began moving skywards.  Once filled enough to be almost completely upright, several people help hurriedly tip the basket upright as well and prepare for takeoff, using their body weight to keep it on the ground long enough for passengers to embark into the basket.  A walkie-talkie test to ensure the ground crew can communicate with the pilot, and they release any remaining cables holding the balloon to the ground and send it on its way!

The ground crew loads up the car and hurries to be able to follow as quickly as possible.  Not only is there a lot of driving (especially through the rough back roads on the outskirts of the city), but there is a lot of pulling over to the side while they verify the direction with Andy and occasionally check GPS and maps to make sure they are heading the correct way.  There’s a fair bit of turning around and heading in a different direction along the way as well.  Cloud Kisser ended up landing just behind Lockwood Schools on a patch of private land.  The owner was so happy to have it land basically in his driveway, and even helped hold the basket down until the rest of the crew arrived.  (This is why we love Billings and its people so, so much by the way!)  The process from an hour earlier is reversed, with everyone in the basket disembarking, tipping the basket on its side, and slowly working all of the remaining air out of the balloon top.  Although with about six people pushing the air out, it took only a fraction of the time for the balloon to be deflated and rolled up while working it back in its bag.  Detach the cables from the basket, and get the rest of the balloon in its bag the same way you force a sleeping bag back in its carrier… about three people sat on it until it fit again.  Then everything is secured shut and loaded back into the trailer until the next ride.

We hope to see Andy and his team back again next year and greatly appreciate the time they all took to answer our questions and give us so much information while they were otherwise occupied and allowing us to follow them, taking tons of photos!  You guys—like your balloons—are amazing and we love this event that has become a summertime tradition in Billings! 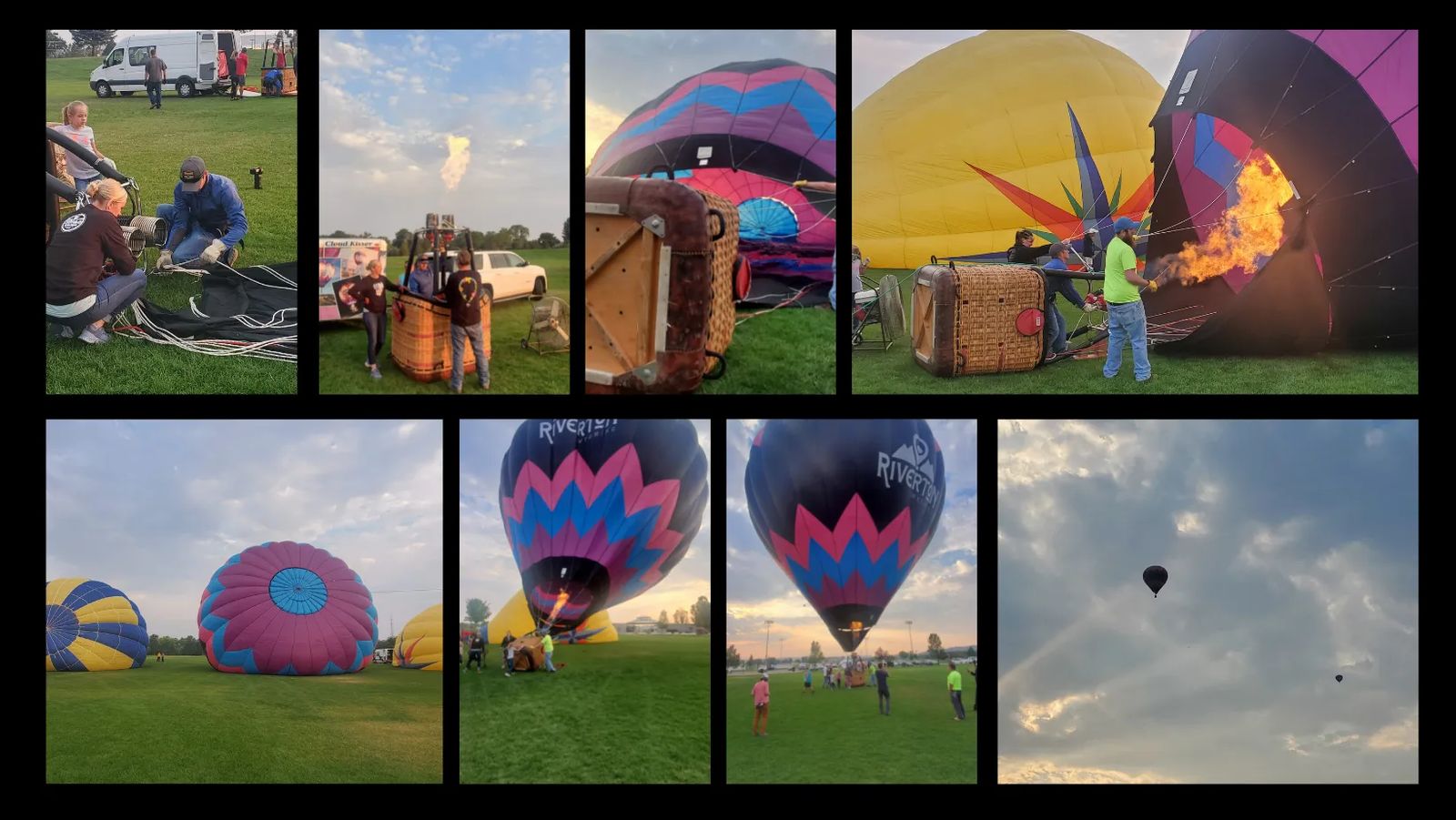 (All events are weather-permitting.  Field Fiesta will be held with or without the Glow.)   Click here for more information.

This article was sponsored by Angie Stiller of Stiller Insurance Agency