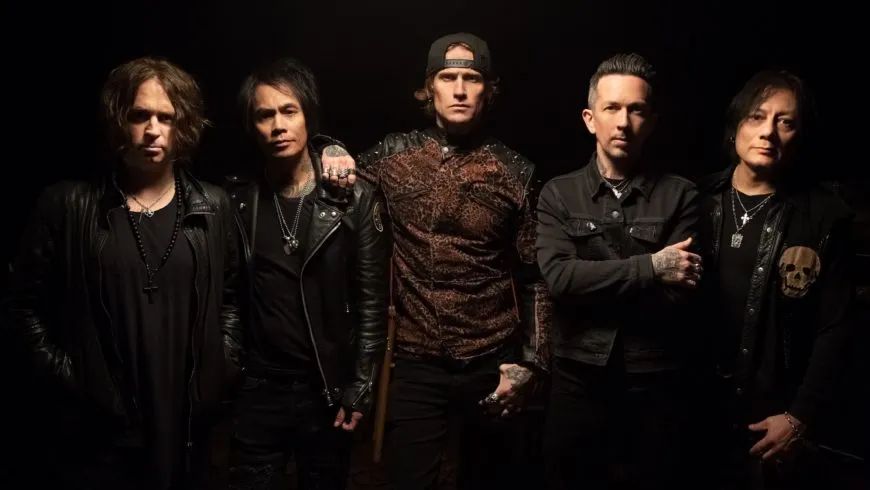 Ask Josh Todd about the inspiration behind Warpaint, Buckcherry’s eighth studio album–and indeed, the frontman’s goal in making music–and he’s got a ready response: “I want to connect with people, host the party, and give people a night they’re never going to forget,” Todd says. As he sings in Warpaint’s title track, “I wanna have fun blowing out your eardrums keep it rocking state to state.” The Los Angeles-based lineup has been doing exactly that since the 1999 release of their self-titled album. Hits including “Lit Up,” “For the Movies,” “Crazy Bitch” and “Sorry,” not to mention Grammy nominations, international touring and Platinum sales, have solidified Buckcherry’s rock ‘n’ roll bona fides. Warpaint, produced by Mike Plotnikoff (Halestorm, All That Remains), with a March 8, 2019 release date, adds to that impressive legacy, boasting the dynamics and immediacy of the band’s incendiary live show, coupled with Todd’s personal, no-holds-barred lyricism.

Recorded at West Valley Recording Studios with Plotnikoff, who also helmed the band’s 15 album, Todd’s goal for Warpaint was for it to be “sonically current. We didn’t want it to sound retro.” Going into the studio in late 2018 with an arsenal of 30 songs written by Todd and guitarist Stevie D., the band worked around the clock for several weeks to capture the energy of the 11 cuts ultimately chosen for Warpaint. The first single, “Bent,” is anthemic but raw, with big drums and even bigger guitars. And, of course, Todd’s relatable, agro lyrics, as he snarls: “the chaos always turns to rage and now I feel so alone and I’m always insane,” before ultimately “breaking all the rules” and emerging as triumphant and “bulletproof” as the song itself.

Todd and Stevie D. had written together on a few side projects prior to Warpaint: An electronic EP for the Spraygun War project, and songs for Josh Todd and the Conflict. “So when we came to the table for a new Buckcherry album, we were in full song. It was a great foundation to launch this great record,” Todd explains. Following the 2015 release of Rock ‘n’ Roll, Todd was faced with issues “both business and personal. And I’ve grown a lot. I can’t say that it’s been joyous. But any time that happens, I get to a new level, and expressing it through song is something I’ve done my whole life.”

The lyrics of “Right Now” speak to Todd’s goal of living in the moment. “There is no past and there is no future… If you really think about that, it’s heavy,” he says. While rock ‘n’ roll is a spiritual catharsis, the singer also works to stay in that state offstage. “I’m coming up on 24 years of sobriety. I meditate 45 minutes a day, and I focus on the now. So much of society is really ‘contempt prior to investigation,’ and I try to be present and non-judgmental and not come from a place of resentment. So many of the songs on Warpaint reflect that.”

The tune “Warpaint” is about Todd’s own heavily tattooed warrior self—but also much more than that. “When I was a little kid I was fascinated with Native Americans and warpaint. People paint themselves or tattoo themselves to not only show up for battle, but to mark really amazing times in their lives. It’s a celebration. I like people who cut off the lifeboat and go for it, and not look back. I feel Buckcherry is that band. It represents perseverance and passion, and not censoring yourself. Sometimes it’s worked for us and sometimes against us, but we always put our best foot forward.”

Buckcherry is the rare band whose talent has allowed them to get away with using F-bombs in their biggest radio hit—‘Crazy Bitch.’” Yet Todd didn’t hesitate when it came to looking at all sides during the creation of Warpaint. “I don’t censor myself when I write,” he understates. “I use profanity in my everyday life and it’s all around me, and us. So, on this record, I looked at all my lyrics, and if I felt swearing might be overdone, I changed it. But if it was needed, I left it, because, ultimately, I have to be happy with it.”

Warpaint delivers an aural punch, a refreshing boldness even on the ballads, and stellar lead guitar work (check out the fretwork on “Vacuum”) and the album closes with an unexpected kick. Todd explains: “’Radio Song’ is introspective look at myself my part in things. And ‘No Regrets’ is so heavy for me to listen to. Stevie came in with this music, saying he wanted to write a punky, Social Distortion-type song. It was amazing, so I went back to my 15-year-old punk rock self and what was going on with me. I thought about the independent records I listened to then, and what they meant to me, plus all the dysfunction that was going on in my home when I was growing up. And it all came out of me in this song.”

The raucous “Devil in the Details” ends Warpaint with “a fiery burnout. I like to put songs like that deep on the record so that people who are really into your band–for more than just the single–get to discover something cool. Just a little thank-you for sticking around to the end.”

Then, of course, there’s the wild-card on Warpaint: Buckcherry’s take on Nine Inch Nails’ classic “Head like a Hole. It was just done as a lark, live in the studio, but came out so cool it made the album. “Yeah, it was very organic. I don’t know Trent [Reznor] but I really admire him,” Todd says. “He did his own thing and created a sound for himself–and a brand–and really stuck to it. When I listen to Nine Inch Nails, I admire the honesty, and no rules.”

In fact, those “no rules,” are what he judges Buckcherry by: Is there unbridled, reckless honesty? “That’s what I ask myself when I listen to Buckcherry: Would my teenage self-put a stamp of approval on it? If the answer is yes, I can go out and represent and feel great about it. I want to compete at the highest level,” Todd concludes. “Keep the integrity, but still please people. If you can do that, great things happen. I feel like we’ve done that on this record.”