Keep in Shape at Steep World

Back in 2005 Jim Rott opened Billings' first climbing gym (aside from the small one at the YMCA and another small one at Rocky Mountain College). The original Steep World was downtown on 13th Street in a small and unimpressive warehouse. Over the next dozen years the gym did well selling gear in the front and offering climbing on a variety of walls. But the space wasn't big enough, and Jim's dream was bigger.

Earlier this year it was announced that Jim's Steep World would be closing, and Steep World Climbing and Fitness would soon open. In early 2017, the new gym broke ground on Billings' West End. After a long 7 months of construction, they opened their doors to the public on November 11th. The new facility is a whole lot of fun. With a gear shop, fitness equipment, a yoga studio, a bouldering wall, a 40 foot roped wall, and an entry level area, there's something for the whole family.

When you walk in the front doors you walk into the gear shop. It's not huge, but it has just about everything you could need for rock climbing including harnesses, belay devices, ropes, gear bags, chalk bags, and more. There's a small selection of clothing. But really, what you will most likely be doing, is heading up to the counter and buying your membership so you can get on the wall. 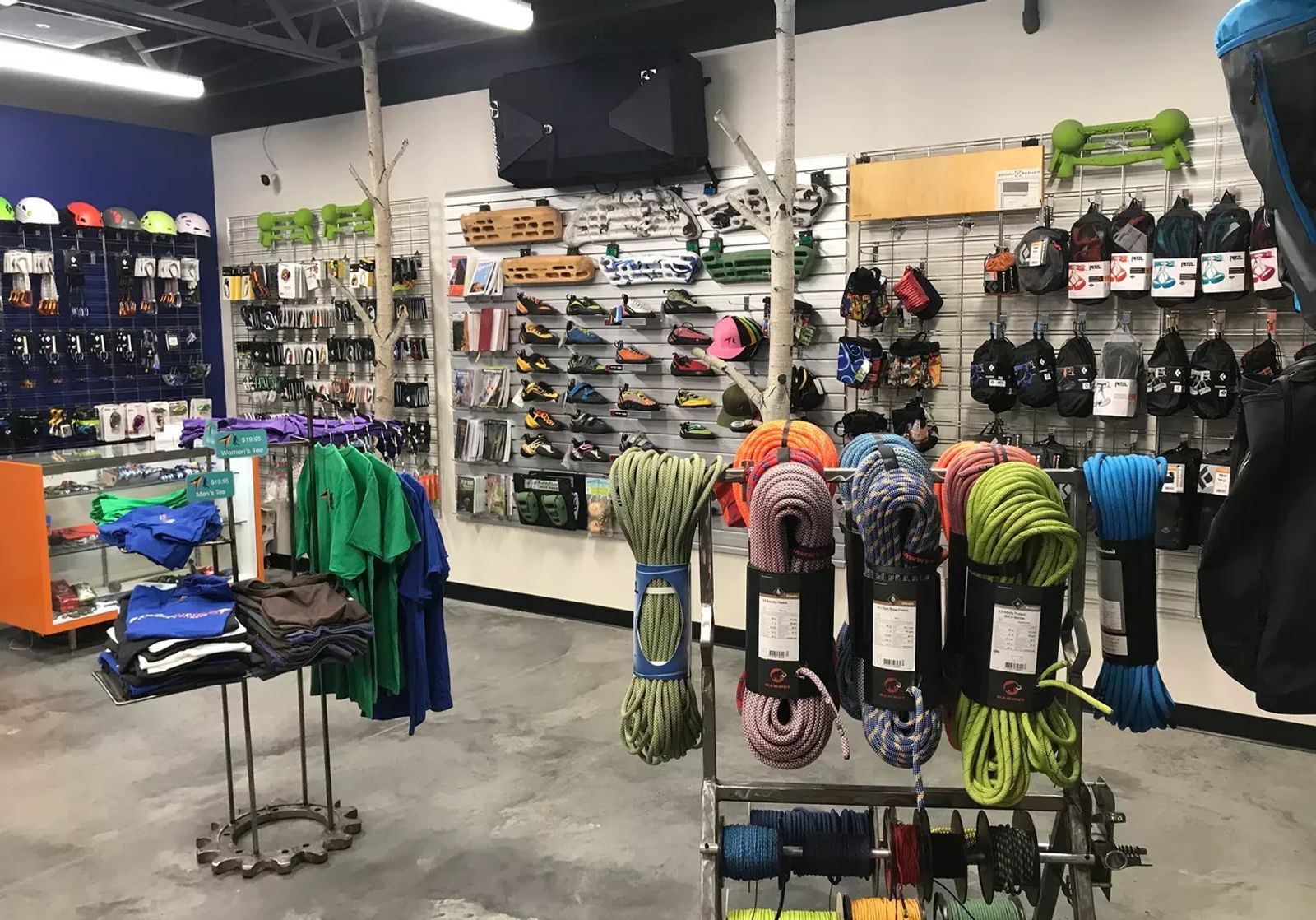 Just past the front counter you enter the main gym. To your right is the roped wall, to your left is the bouldering "cave" and between the two are some surprisingly comfortable seats made from crash pads.

Every route on any of the walls are color coded. The starting hold has a tag that lists the difficulty, and then you simply follow the same colored holds the entire way up. So if you start on a green hold, you only use the green holds for that route. Some have a finish tag, others you top out on the wall. 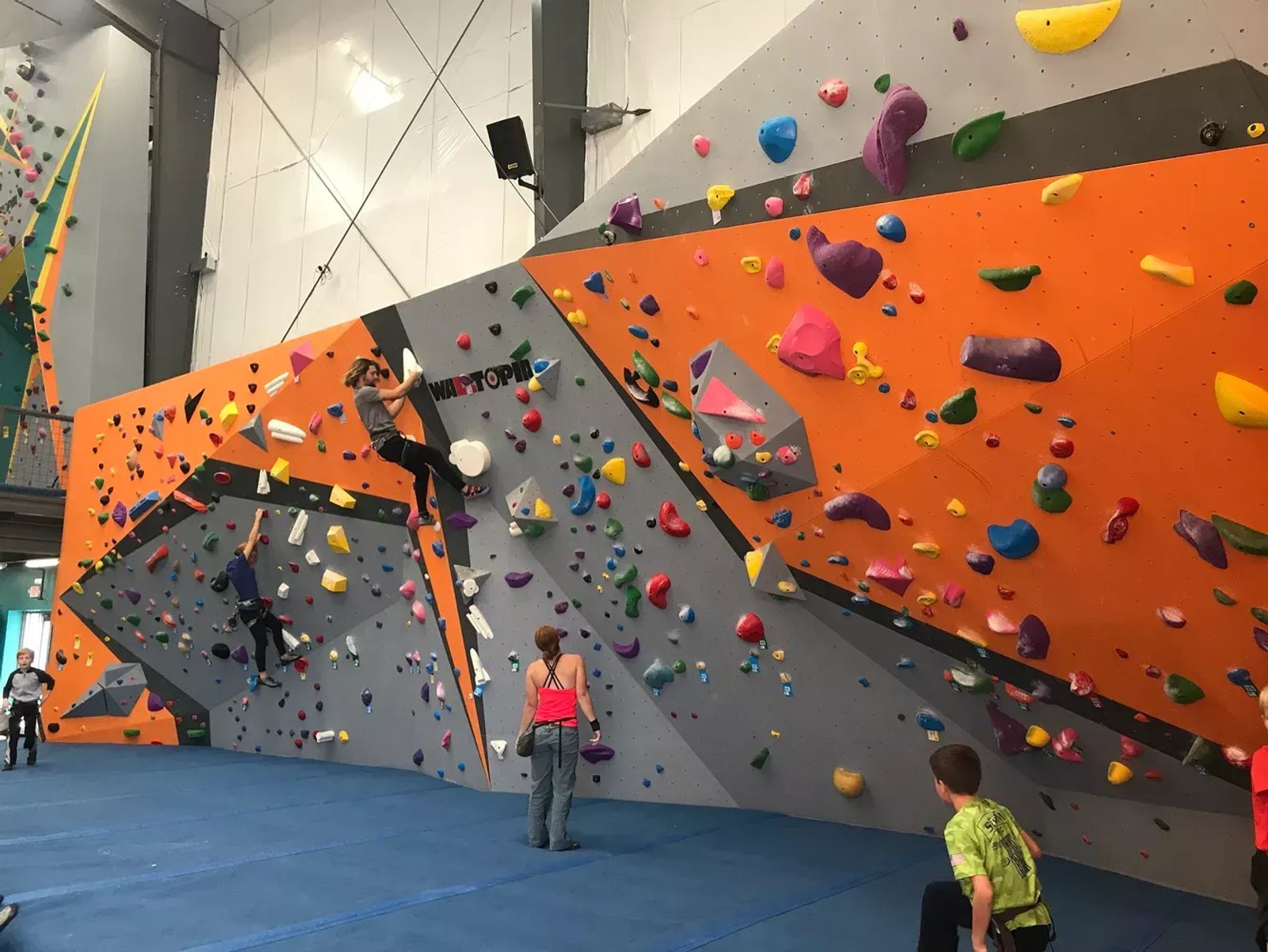 On the lower level the wall ranges from vertical to overhung. Route difficulty starts at V0 and currently the hardest is a V8. But that will change as more routes are developed.

Opposite the bouldering wall is a 40 foot roped wall. This area was designed to be the same height as the majority of the routes on the Rims, so when you climb it you can get a feel for how high you will be climbing outdoors (and also what length rope to buy if you're going to stick to the Rims). 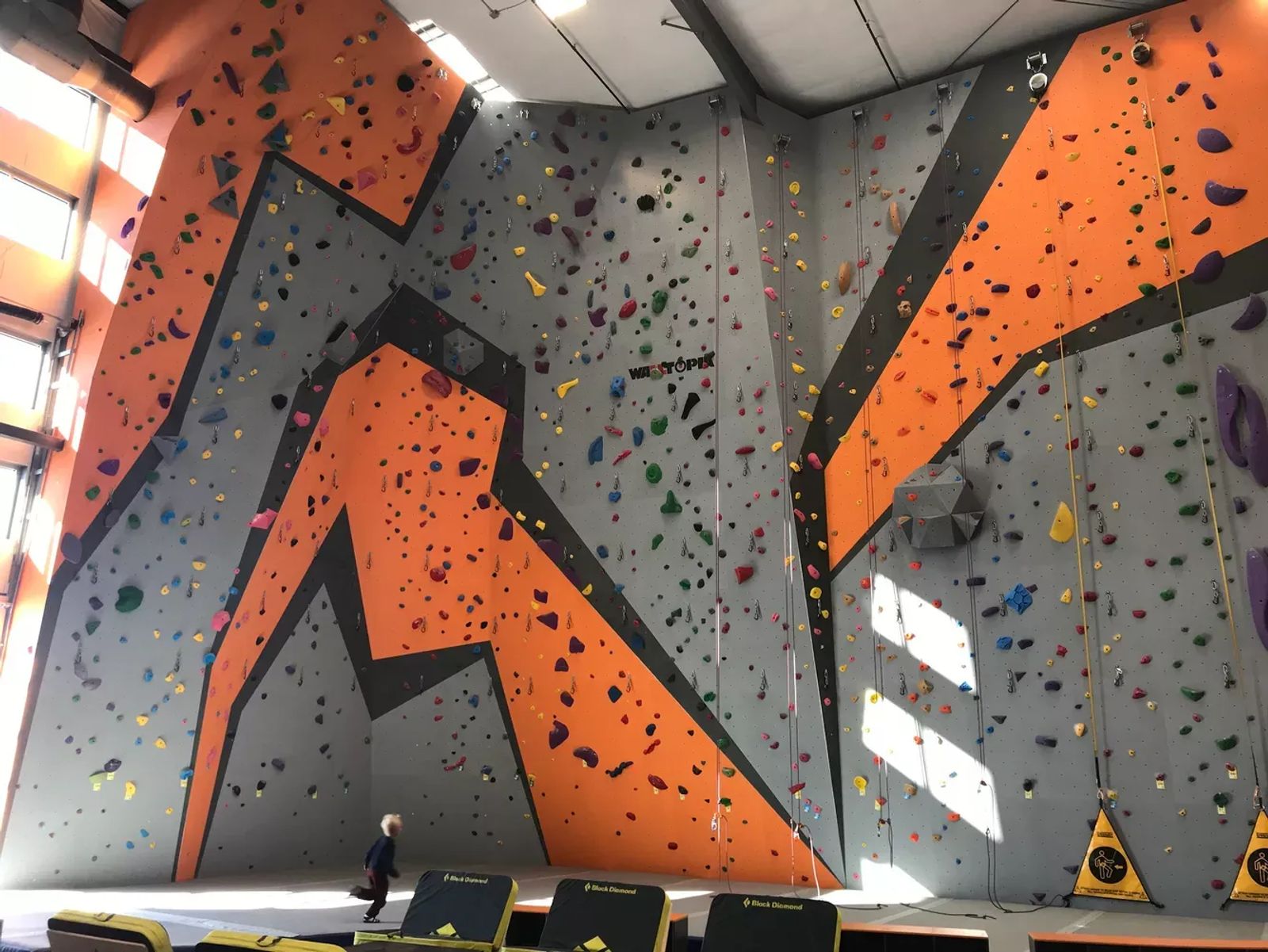 Currently the right hand side of the wall is set up with 2 auto belay devices so that you can climb even when you don't have a partner with you. Nearby there are several fixed ropes with Grigri devices for belaying. Before you can use the roped walls you have to pass a certification test. Don't worry, it's pretty easy if you know what to do. 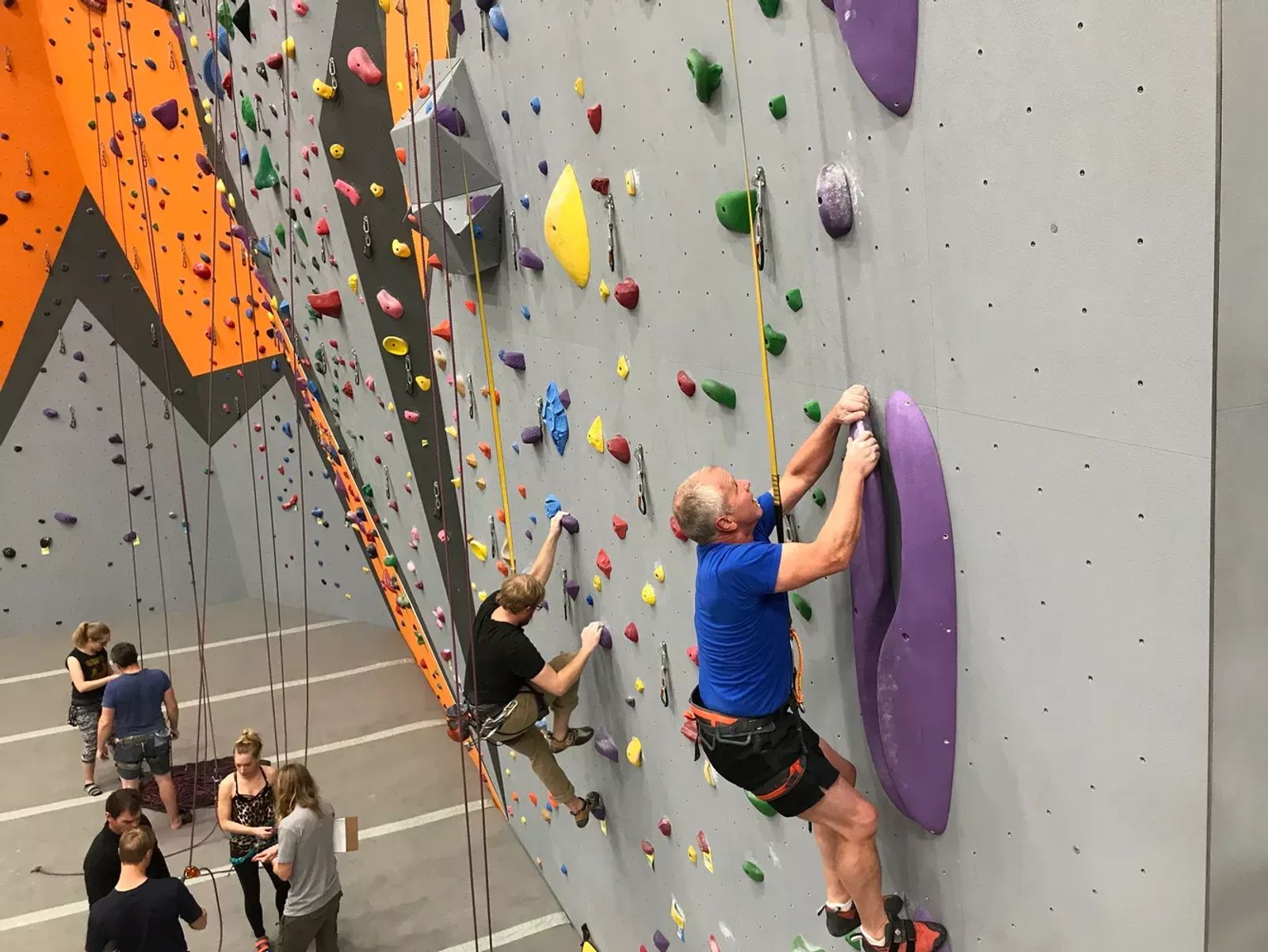 Next to the fixed ropes are a number of routes that have fixed quickdraws. After you have passed your lead and lead belay certifications (you get colored zip ties to show that you're certified) you can climb any of these routes. Ropes are available for $15 per day, or bring your own.

Speaking of gear, rentals are available for shoes, harnesses, and chalk bags.

The bulk of the building is dedicated to the roped wall and bouldering wall, but there is an area upstairs on a mezzanine level. At the top of the stairs is an entry level bouldering area and roped wall called Boulderland. Here you can practice your skills before heading downstairs, or kids can build their confidence. 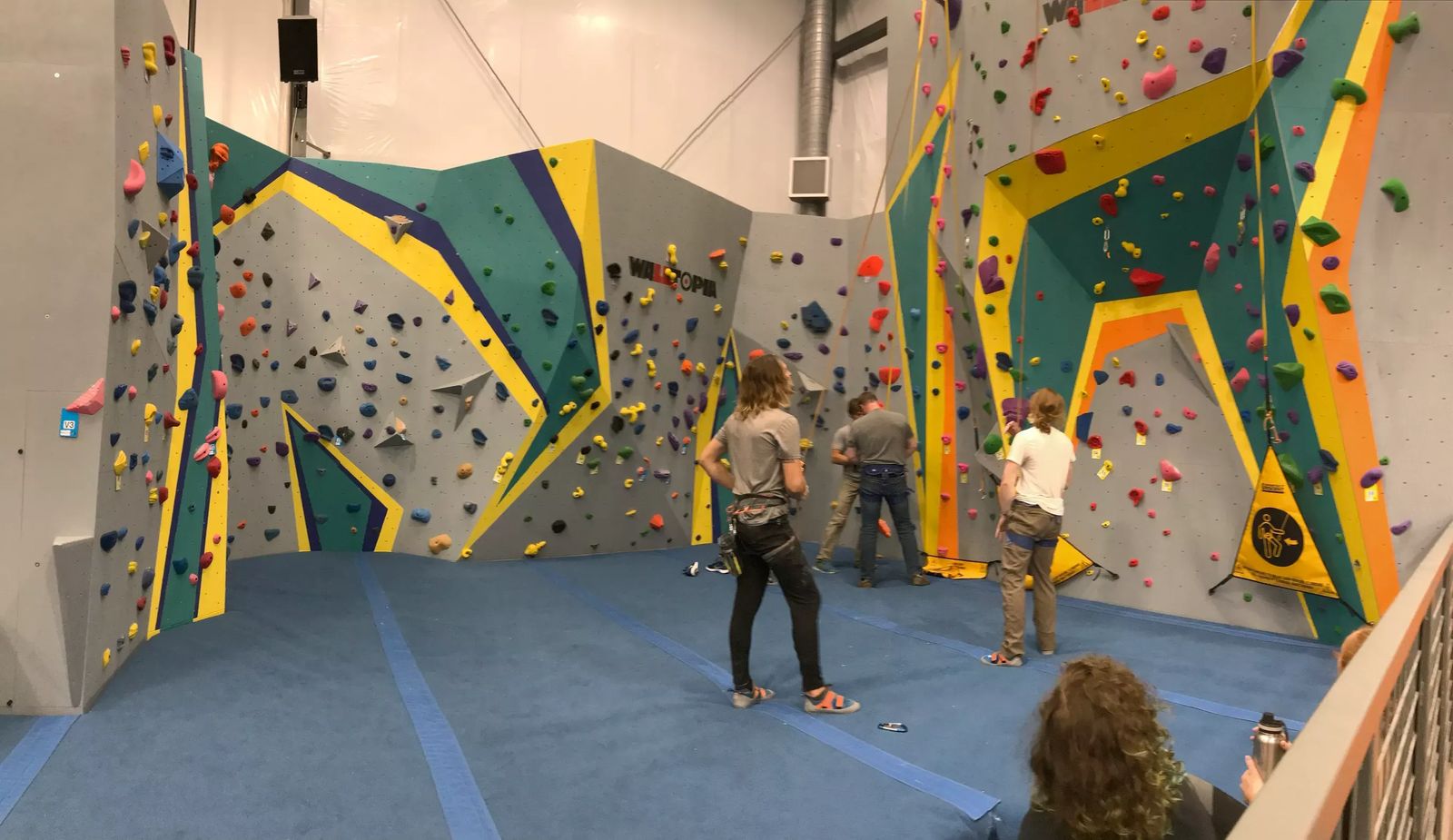 The walls are smaller upstairs, and the routes are easier. Bouldering routes start at VB (slightly easier than V0) and cap out at V3. The roped climbs are mostly 5.5-5.8 but there are a couple of 5.10's for those who want a little more of a challenge without climbing too high. Three auto-belay ropes and one fixed rope allow several people on the wall at the same time.

At the top of the stairs and to the left is the fitness center. Despite its small size, there is a big variety of choices. Overlooking the main floor you can use the stair steppers, treadmills, exercise bikes, or elliptical machines. Against the far wall are free weights and a machine for doing pull ups and dips. The wall that separates the beginner climbing area and the fitness area is covered with finger boards to hone your pull up strength. 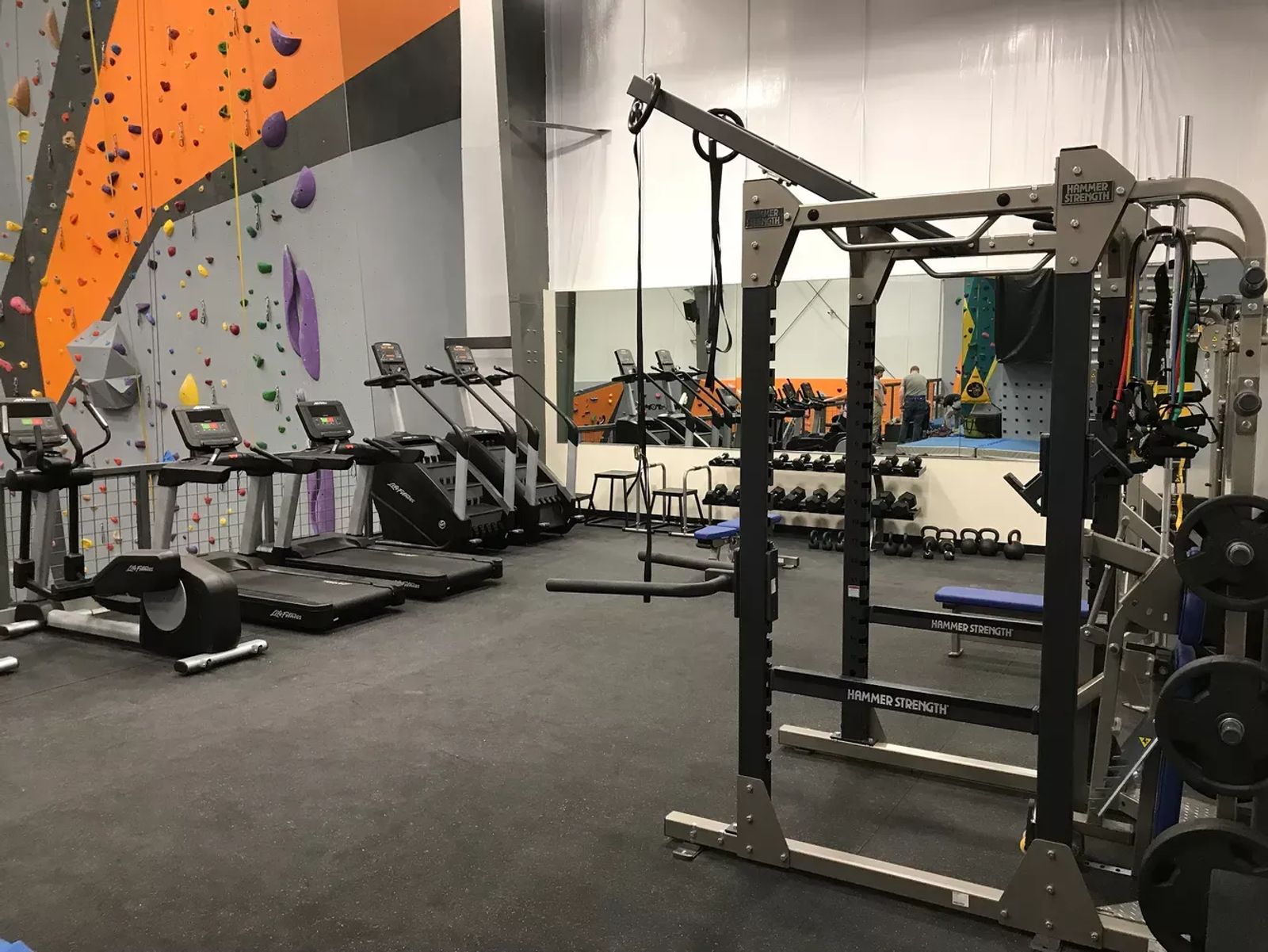 Underneath the fitness area is a small yoga studio. There will be electronic classes taught (pre-recorded) at scheduled times. Depending on your schedule or your desired goals, you can join one or all of them throughout the day. There are morning classes and evening classes with the majority being in the middle of the day. 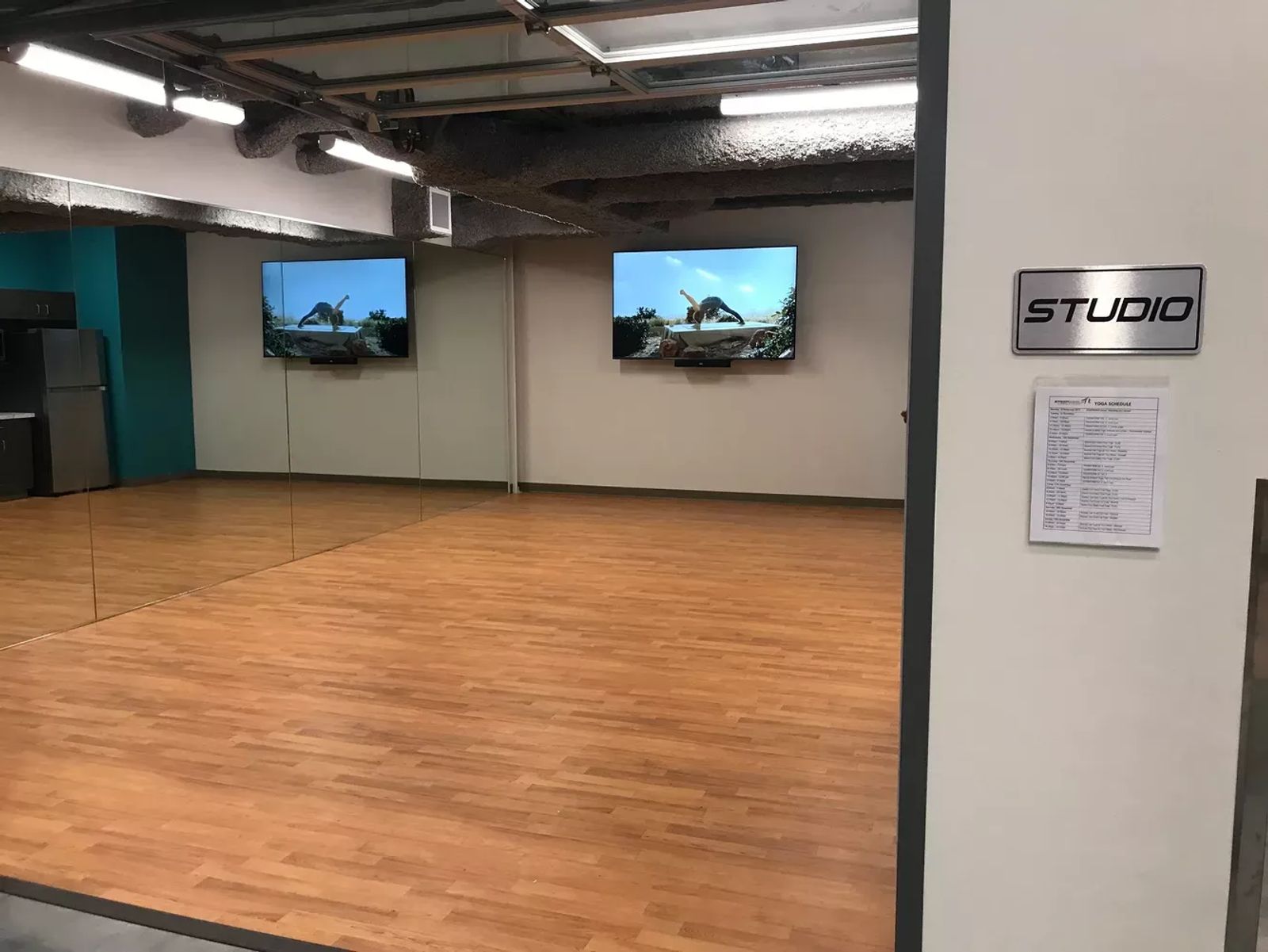 No yoga mat? No problem. There are several for you to use provided by the gym.

Get Your Membership and Stay in Climbing Shape

Over the winter it's tough to get outside and on the rock. But that's no excuse to let your climbing muscles wane away. Memberships start at $44/month for students, or try it for a day for $17 for adults ($12 for kids 11 and under). Even if you don't want to climb every day, you can always join to use the fitness and yoga studio; you'd pay just as much at another gym that doesn't have the climbing option. 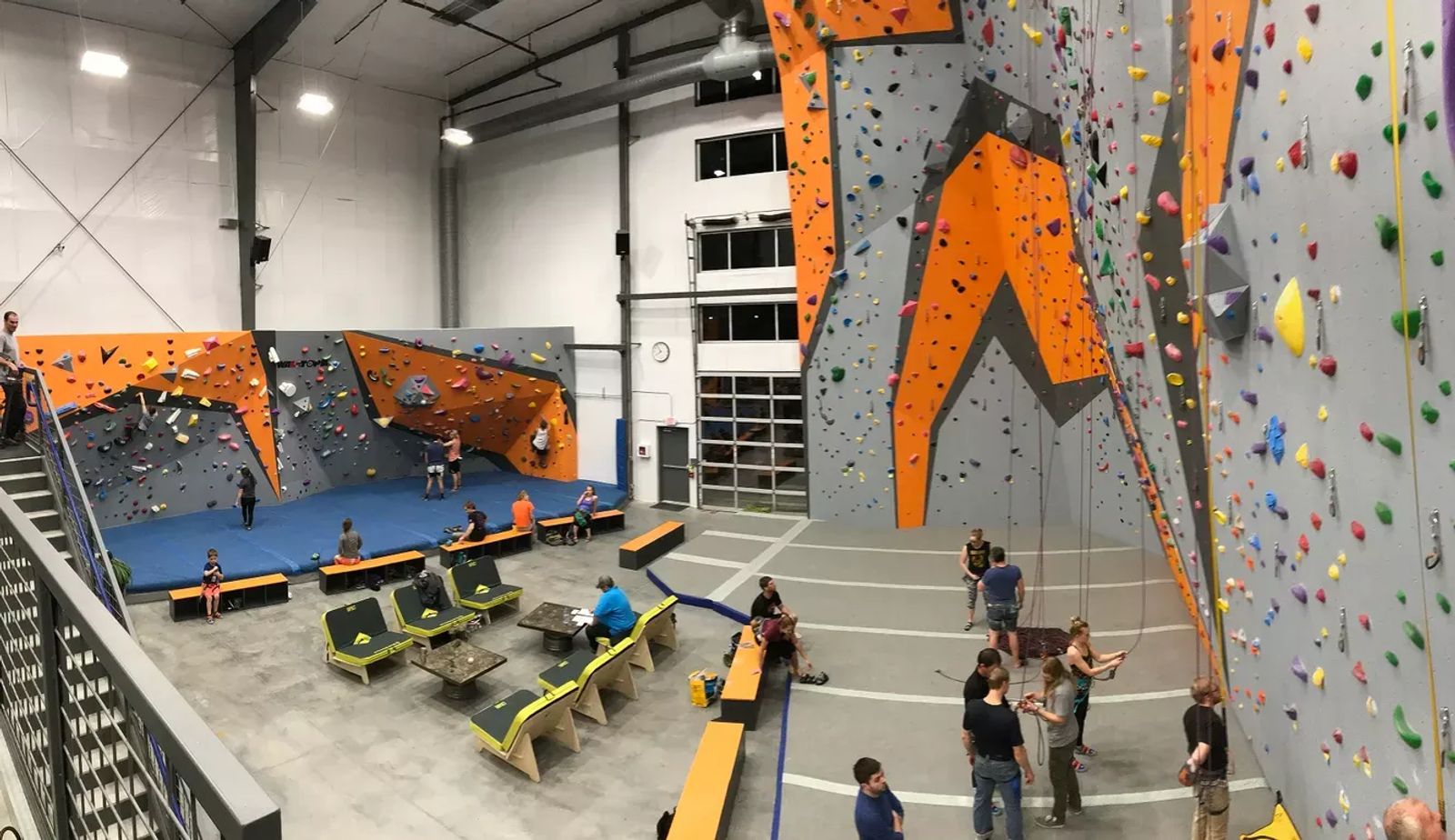