Billings, we're about to get a weekend full of the 90's best rock hits! This summer we'll get to see The Wallflowers, Sugar Ray, Smash Mouth and The Toadies all live in concert AND it's outside!

After this winter, I'm pretty sure we can all hardly wait to be outdoors, experiencing some 90's nostalgia with a cold beer in hand. Sounds heavenly!

Tickets are on sale now! Prices for each night are $59.99 General Admission (inclusive of all fees) and $89.99 for VIP (inclusive of all fees and VIP parking).  Tickets can be purchased at www.bigmontanamusic.com, the Shrine Auditorium, High Horse Saloon and Eatery, Poly Food Basket, The Reno Club, and Squire Lounge in Billings.  VIP tickets include a preferred viewing area for the concerts, preferred parking, access to the VIP tented lounge with its own bar, tables, and chairs.  Save $10 when you purchase 2 Day passes at any of the physical ticket locations. An adult must accompany all minors.

The concerts will take place at the Cove Creek Outdoor Pavilion, located at 56th Street West and Central Avenue in Billings, Montana. The setting will offer a grassy field with the giant stage set against the Montana skyline. Attendees are encouraged to bring their own chairs, blankets, and umbrellas for shade.

Attendees can enjoy ice-cold beers and cocktails, food from local vendors and non-alcoholic beverages on site.  Other vendors and activities will be located throughout the event. Interested food vendors and merchants can visit www.bigmontanamusic.com to apply for space.

Extended stay will be available for those wishing to stay overnight. RVs and tents will be permitted for an additional fee of $50 each at the gate. Extended stay passes are also available ahead of time at any of the physical ticketing locations. (This fee does not include tickets to the shows.)

In 1997, Sugar Ray’s collaboration with reggae artist Super Cat resulted in the song “Fly,” which dominated the airwaves. Later that year, and following the success of their number-one hit, Sugar Ray released its second album, “Floored,” which went double-platinum. After “Floored,” Sugar Ray released “14:59,” in reference to its fading “15 minutes of fame.” Ironically, the CD wound up outselling its predecessor, going triple-platinum with hit singles “Every Morning,” “Someday” and “Falls Apart.” Their success continued with the release of the self-titled album, “Sugar Ray,” which garnered the band it’s first-ever top-10 album.

It’s been 25+ years since the Toadies started playing rock music in Fort Worth, Texas. Through lineup changes, shelved albums, band break-ups, and reunions, the Toadies have experienced nearly everything. They burst onto the scene in 1994 with the breakthrough Rubberneck, including the singles “Possum Kingdom,” “Tyler.”

Steve Fulton is a singer/songwriter from Boise, Idaho. He has performed all over the country for the last 20 years touring with his band and as a solo artist. His musical persona includes full band funky-rock-reggae and stripped down Americana.

As part of the mid-90s revival of roots-rock, the Wallflowers held a special connection to one of the original inspirations: vocalist/songwriter/guitarist Jakob Dylan. Though he is the son of a legend, Jakob’s similarities to his father are occasional -- in fact, the Wallflowers are more influenced by Tom Petty & the Heartbreakers than original 60’s folk-rock, though lyrically, Jakob remains a close companion to the original Dylan.

Bringing Down the Horse was a big seller throughout 1997, thanks to “6th Avenue Heartache,” “One Headlight,”and “The Difference,” the third single pulled from the record. Early in 1998, “One Headlight” won Grammys for Best Rock Song and Best Rock Performance by a Duo or Group With Vocal.

In 2017, venerable multi-platinum and Grammy-nominated band Smash Mouth will be celebrating the 20th anniversary of their debut, smash-hit album “Fush Yu Mang”. Released on July 8, 1997, “FYM” was a shocking -- and industry-changing -- success. Out of nowhere, the single “Walkin’ On The Sun” was an immediate international sensation. (Quickly shooting to #1 on the Billboard charts, and eventually boosting “FYM” sales to over 3 million copies in the U.S. alone.) In the two decades since, Smash Mouth has not slowed down. In fact, they are as vital and vibrant as ever.

The Kurth & Taylor Band was formed by Emmy Award winning songwriters and performers, Wally Kurth & Christian Taylor. The band is fronted by General Hospital and Days of Our Lives star, Wally Kurth, a native of Billings, MT.  Concertgoers will enjoy their high energy rock n roll.

Montana Pipeline Presents, LLC is a newly formed concert promotion company and is comprised of local businessmen, Brian Kurth, CEO of BTC Oil Properties; Stephen Casher, CEO of Delight & Riot Venture Capital; and Jim Kisling, CEO of Kisling Quality Builders. In the summer of 2017, Brian Kurth promoted 2 festivals on his property and in doing so, brought to market a new outdoor concert venue for Billings, The Cove Creek Outdoor Pavilion. Upon validating his proof of concept for the outdoor festivals, he teamed up with Casher and Kisling. The trio will work together to grow the events that take place at Cove Creek Outdoor Pavilion and are committed to bringing diverse shows to Billings. 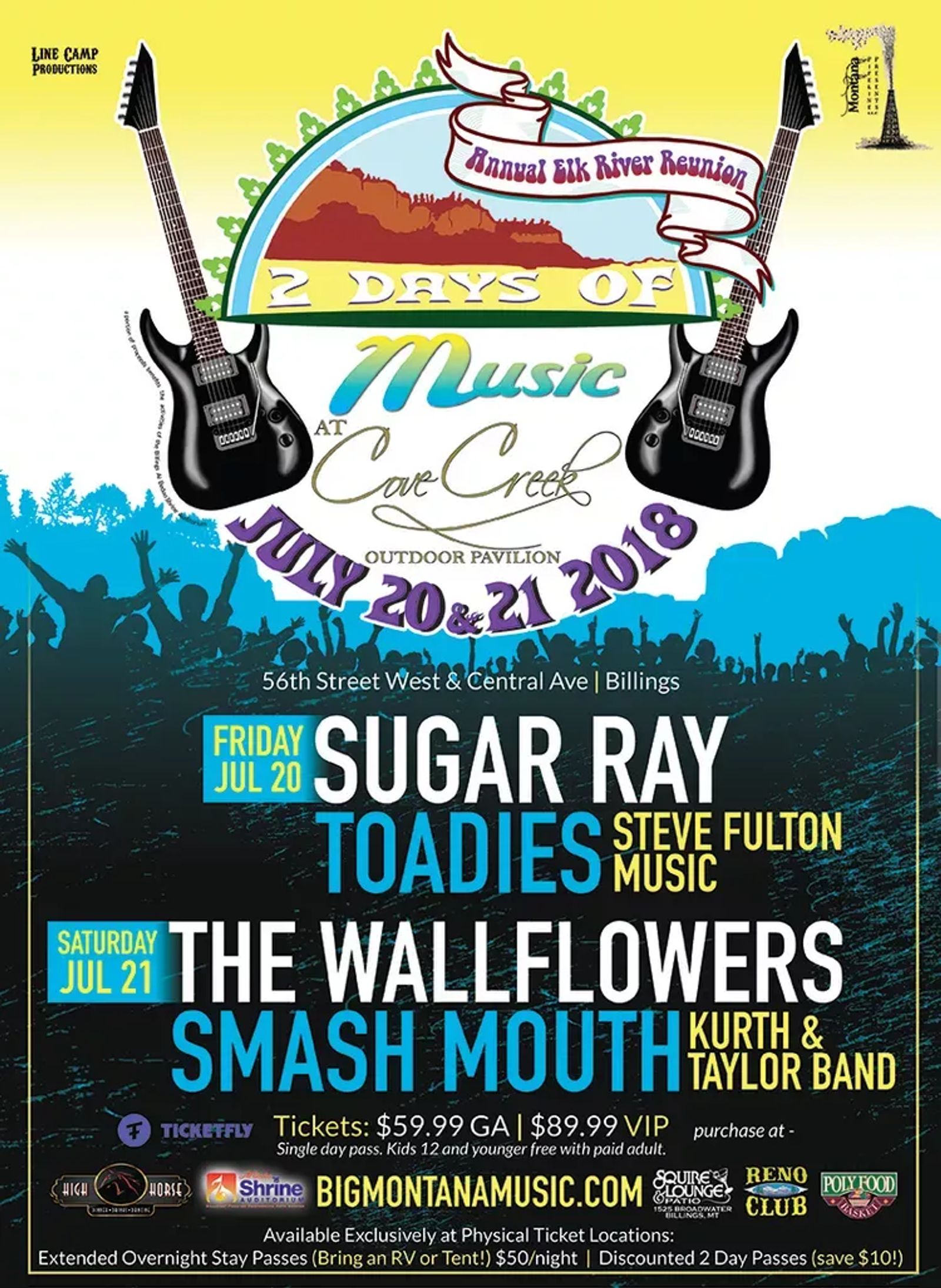